At the end of last month the UK publishing industry descended on the Barbican in London for the Bookseller Marketing and Publicity conference. I was unable to attend but managed to follow the stream online as over 40 speakers shared their insights during the day. Below are my key highlights and takeaways from the day. Make sure to subscribe to The Bookseller to find out when their next event is on.

See last years notes from Marketing and PR or from the Childrens conference.

Quite a few speakers and panels during the day discussed harnessing influencers and communities to find and engage new audiences.  This tactic featured heavily in many of the campaigns. 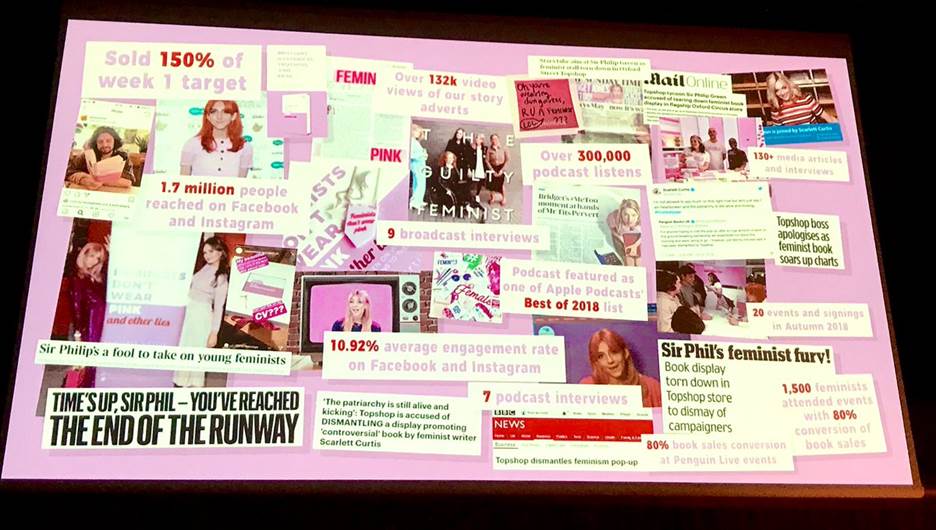 Instagram was identified as the most influential platform for their core audience (Gen Z/Teens and Millennial/Parent Gifters). However it was important to look beyond  the ‘book bubble’.  The team deliberately targeted non-book lifestyle influencers.
However reaching out was not enough. It was important to engage with the audience using the right content. “Content is Queen” according to Maura Wilding.

During the day Andrew Rhomberg, founder @Jellybooks dug into the nitty gritty of paid promotion and reader acquisition on social media. He emphasised the difference between those who click on your advert or paid promotion (CPC, Cost Per Click), and those who actually become a reader after clicking (CAC, Customer Acquisition Cost).  Both are measurable but ultimately CAC or cost per reader acquired is the ultimate measurement of success. 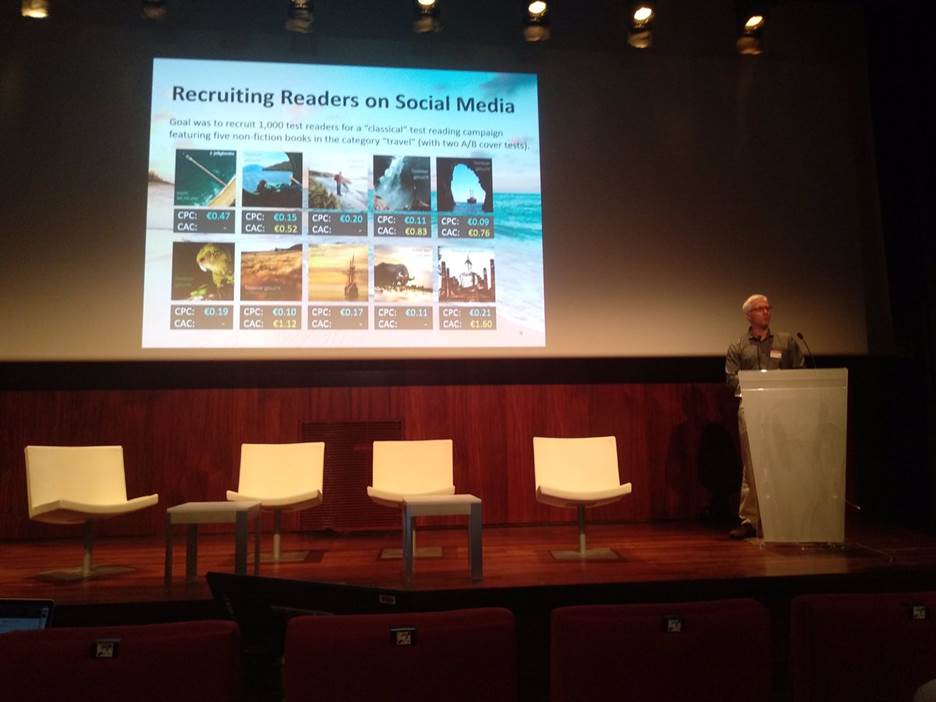 Image c: @arhomberg from a campaign for Droemer Knaur in 2018

Of the ten Instagram posts shown, one brought in more than half of all readers from the campaign. The post did not have the lowest cost per click but it had the lowest and most effective cost per reader acquired. 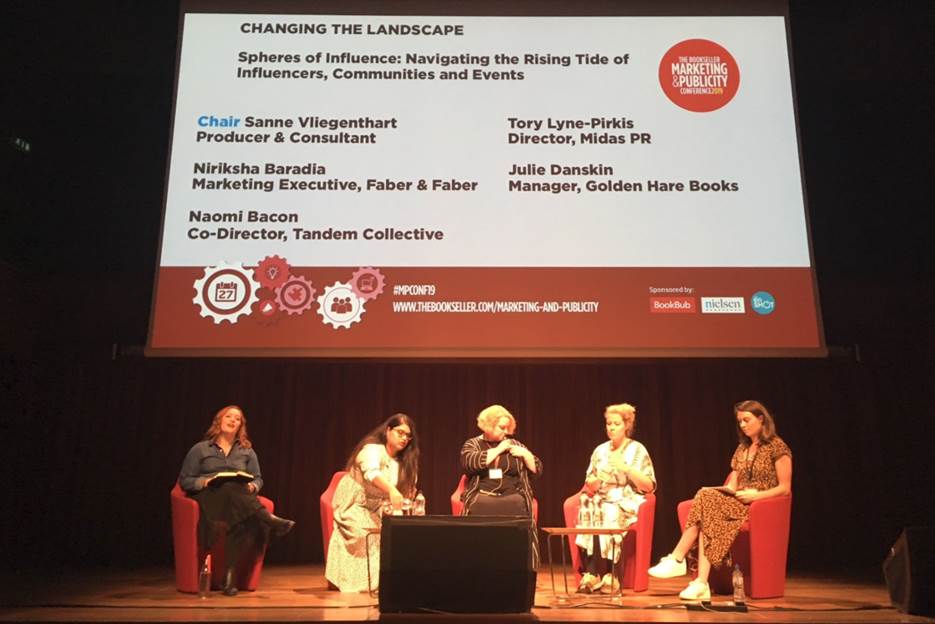 Niriksha stays organised with a spreadsheet listing influencers’ likes and interests to inform and personalise her pitches. A personal touch works better, especially with retailers.

“Try to have one-on-one meetings with influencers so you can find out their tastes, because you want to tailor your pitches” recommended Naomi Bacon. Although not all books can work in the influencer space stressed Naomi. It’s important to question your assumptions and use your budget wisely.

Influencer marketing can often be cheap in terms of direct costs as unlike other industries book influencers often do it for the love of books and don’t tend to get paid.  Book bloggers are mostly amateurs not professionals like in fashion, travel, lifestyle etc. However it can be hugely costly in terms of time as it takes a lot of it to do well.

Outside of the conference it is worth reading this study from Chris Penn over at TrustInsights which shows that organic engagement is declining on Instagram. It is not surprising as similar has happened over on Twitter and Facebook as those networks moved to better monetise their platforms. What it means is that brands will need to start paying more to achieve what they used to be getting free and organically.

Publicity Director Tory Lyne-Pirkis from Midas PR spoke mainly around events and pitching talks and workshops to them. “With events, you can really think outside the box. It’s important to get your authors out to new audiences, it’s a great opportunity to sell books. “

When promoting a book Author interviews are the most influential way to attract an adult audience according to James Erskine during another session. But for younger readers animation and events are more engaging ways to reach them.

It is important to research the event. Look at past programmes, follow them on social media and look at what topics are of interest to them.  “Think of rejection as redirection – if your pitch for an author doesn’t work, find out why and adapt it next time” said Tory.

Tory suggested you can also create your own events and build great partnerships that work with the publisher’s brand long term . But not everyone has been to a book event or knows what to expect so can feel a little intimidated. Rosie Beaumont-Thomas of Waterstones Gower Street try to create bookish events for people who had never been to book launches before. Rosie shared her teams checklist of things to consider when running an event.

But measuring a return from events can be difficult. “What’s really important about events is looking at the things you can’t put a cost against. I think about festivals as more like a form of media in terms of raising awareness of authors.” shared Tory.  Niriksha and her team at Faber measure success in two ways – by looking at digital data stats and in terms of content created.

Whether it’s pitching your book to events, influential reviewers or bookshops James Spackman shared some pitching tips and things to avoid.

“We all do it, but we don’t all feel good about it” said James about the often unsavoury practice of pitching but he stresses its worth a bit of discomfort to get it right.

As Tory and Niriksha stated above it is worth researching who you will be pitching to and matching your message to them.  “Everyone filters through their own agenda. Mentally, where are your audience? Where do you want to take them?” asked James. When people are listening to a pitch they aren’t listening to what it is, they’re listening about what it means to them.

James has assembled a list of overused book pitch clichés that should now be banned.

When you have your pitch invest time in practice and rehearsal. Don’t just read it in your head, deliver it out loud. Don’t just throw out the book’s title, speak it slowly and clearly.  As an industry James says we tend to favour an image of ‘charming amateurism’ instead of being too slick or trying too hard. Practice your pitch with this in mind.

In one of the last sessions of the morning Ruth Barnes, Director of Chalk and Blade Audio chaired a panel on podcasts and Audio books with Clarissa Pabi, UK Content Manager, Acast and Alice Lloyd, Commissioning Editor for Audio and Podcasts, Trapeze.

There is a fear that podcasts will steal audience from audiobooks, but in reality they are very different products.  Audio is the fastest growing sector in publishing. The market has doubled in the last 5 years reaching £121m in 2018.

Multitasking is one of the driving forces for the growth of audiobooks. i.e. during workouts.  In reality audiobooks and podcasts are competing with music not with printed books. This presents a marketing opportunity as audiobook consumers are increasingly likely to listen to podcasts. But if targeting podcasts it is important to create a universe around your author that isn’t just about the book. As Clarissa said during the panel “The best content is the bit they didn’t come on to talk about”. 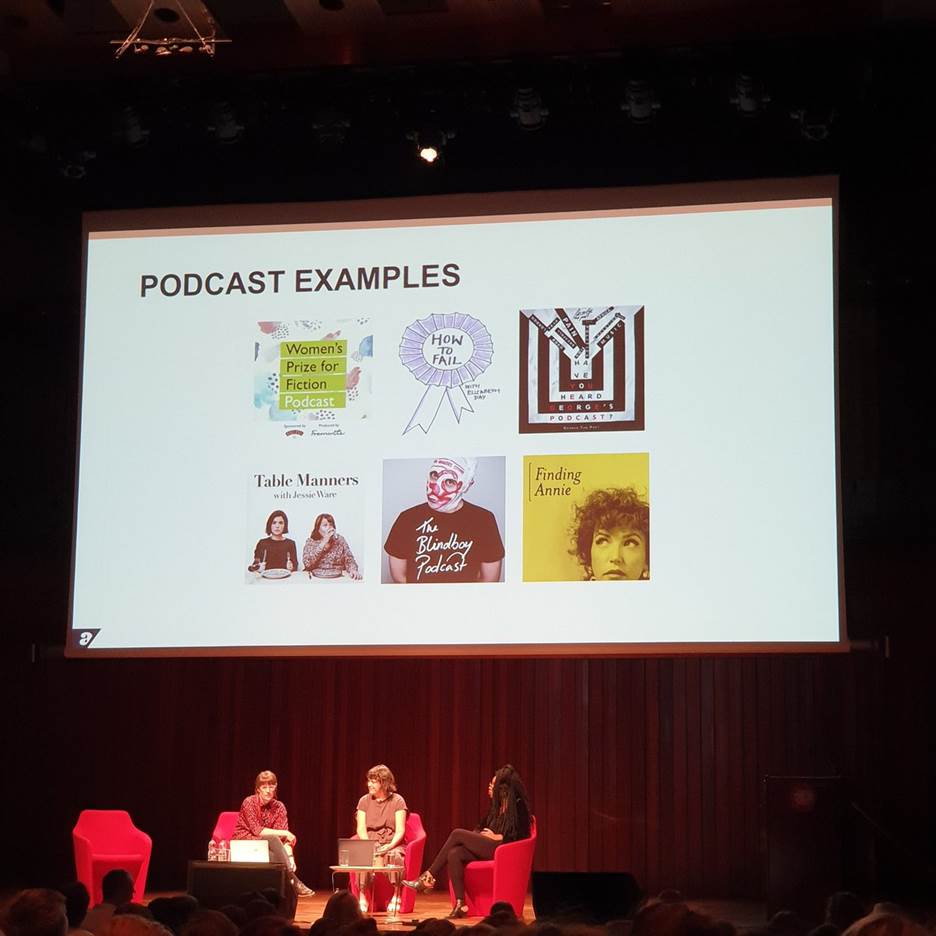 Various successful book campaigns were shared throughout the day. Here are 12 highlights and key learnings from them.

Turning Steve Cavanagh into a brand author with ‘Thirteen’

The erosion of work and life boundaries is taking a toll in the industry.  @_TheFlip , @anitasethi and @pollyosborn Raised the important effect on mental health and staff turnover.

“Content is king, but when you pair it with data, insights and environment it becomes King Kong” @JamesErskine

That’s it. I am sure I have missed loads. If you think there is something important I should include let me know. Also if I have any details incorrect please fire me an email at alan@spoiltchild.com.

Subscribe to find out about new illustration and artwork as well as resources and tips.

Emails are only a few times per year.