Top takeaways from The Bookseller Pr and Marketing conference 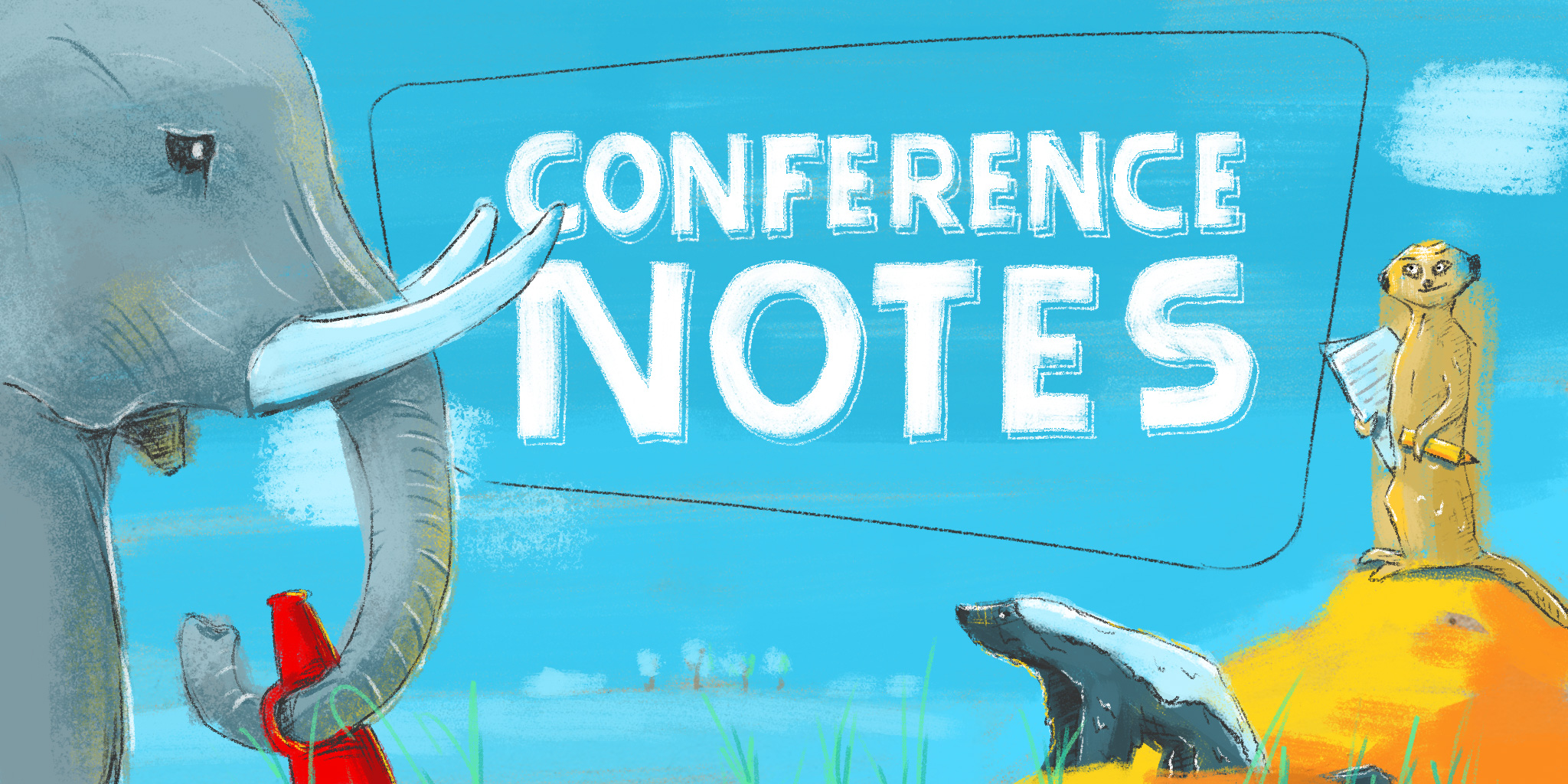 The brightest and best of the UKs book PR and Marketing professionals gathered this week in London’s Milton Court.  Top of the agenda was sharing the success stories of the past year to learn from and build on going into next year. Below are my top take aways from the event but make sure to also read the write ups over on The Bookseller.

How Monocle grew their business.

Andrew Tuck, editor at @MonocleMag opened the conference talking about how they  have grown  their audience and business over the last 12 years in the difficult world of magazines.
Monocle don’t have social media. They are not interested in ‘promiscuous’ readers which they feel social media drives. Instead building their audience and profile on other platforms they set out early to build their own platform. Looking to build a loyal long term fan base.

Instead of trying to reach people digitally,  but they host over 60 events a year for their subscribers . Face to face builds stronger, real connections.

Social and promiscuous drives everything towards free and disposable.

“Our ambition is to never give away anything for free. Journalism is a valuable product that should be paid for."

They wanted to produce a product that is a celebration of journalism and also the craft of printing and it is obviously working as they have more magazine subscribers than ever before.

Of course “You will have failures along the way” finished Andrew, “but it’s about finding your audience in a way that works for you.”

5 marketing Commandments that will make your brand a contender

Senior marketing strategist Anna Chapman spoke on the 5 marketing Commandments that will make your brand a contender.  Contagious, the agency Anna is from has a book out soon with Penguin  The Contagious Commandments: 10 Steps to Brand Bravery .

As an example Anna talked about a brilliant campaign from Cards Against Humanity.
Cards is a relatively small brand that continually punches above its weight. It’s a party card game in which players complete fill-in-the-blank statements using words or phrases typically deemed as offensive, risqué or politically incorrect.

Cards launched a “Save America” promotion promising six tongue-in-cheek surprises for $15. For their first surprise they announced they bought land on the US/Mexican border to try and upset Trumps plans to build a wall there. “we've purchased a plot of vacant land on the border and retained a law firm specializing in eminent domain to make it as time-consuming and expensive as possible for the wall to get built."
They sold out 150,000 slots within hours of the campaign launch, donated a $300,000 portion of the profits to charity,  delighted their audience and got a ton of worldwide press.

“Cause a welcome disruption on the street. Be bold. Be on point. Push boundaries. Be exciting.” 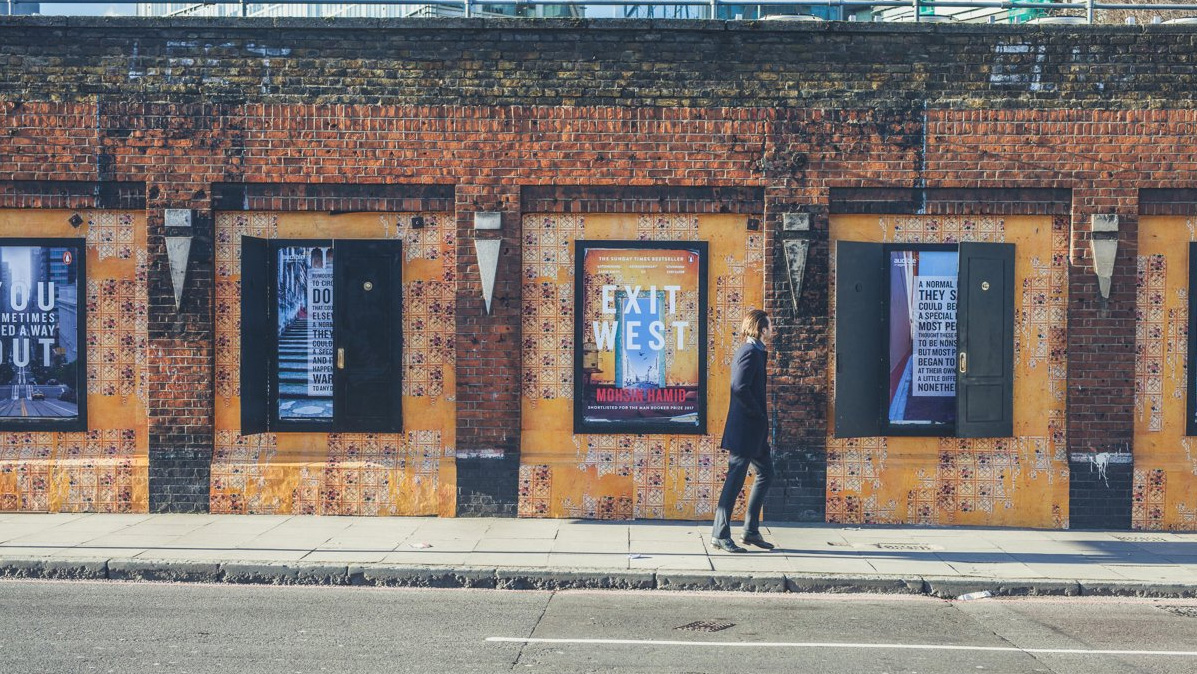 Jodie Mullish from Bluebird Books (Pan Macmillan) talked about the campaign they did with Russell brand.  Their strategy to promote Russell Brands new book Recovery focused on four key areas to leverage his existing audience.

The campaign for the book Slay In Your Lane focused on celebrating the lives and voices of great black British women.

"We decided that we wanted to start a campaign that celebrates, amplifies the voices and increases the visibility of trailblazing black british women." Said authors Yomi and Liz.

This was achieved in part across all the social media platforms using the hashtag #SIYL . 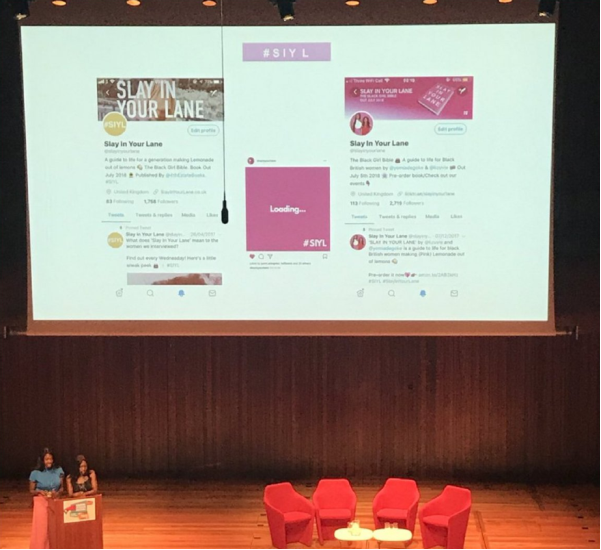 To engage their audience it was important to the campaign not to talk with their  followers but to talk WITH them.

“We wanted them to know that they could trust us, that we were an authentic brand. We look like you and speak like you”

Get retailers on board

The team from Penguin highlighted the need to get retailers on board when promoting Goodnight Stories for Rebel Girls . They shared some great images of how booksellers embraced the book. 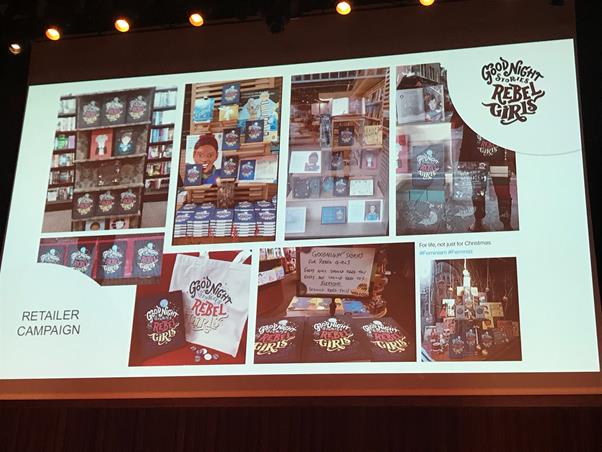 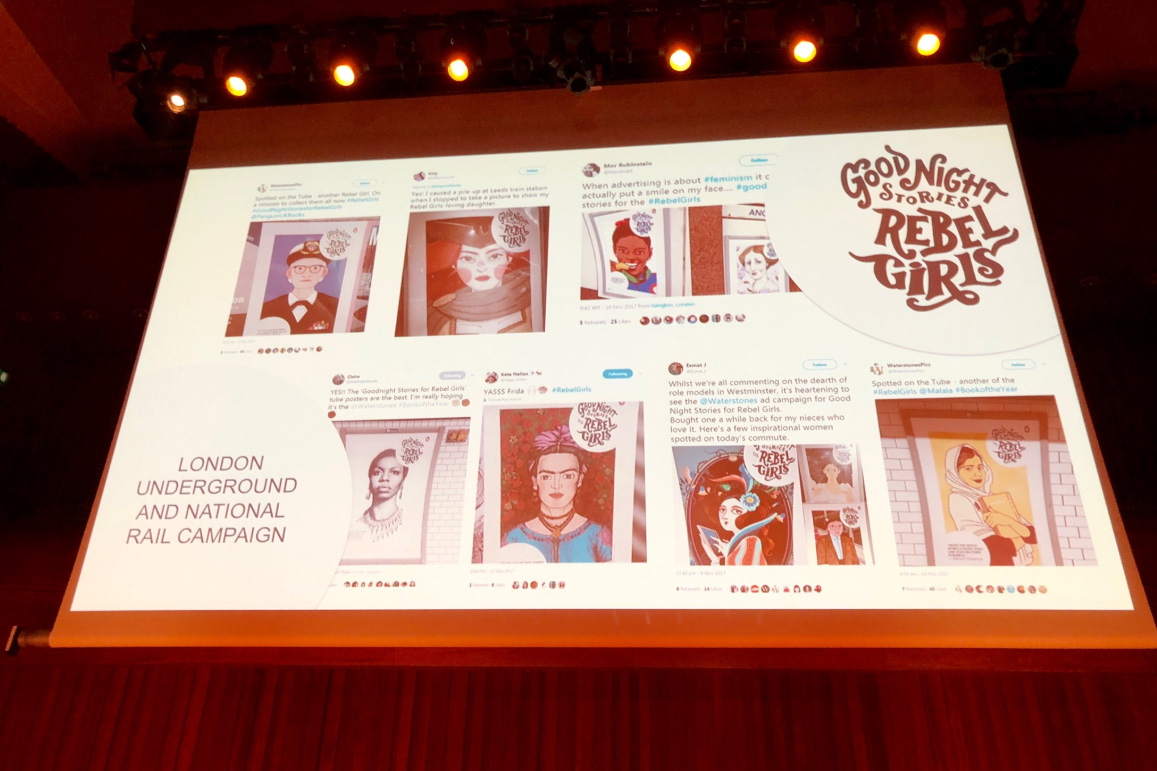 Eleanor Oliphant is Completely Fine (HarperCollins) and The Handmaid's Tale (Vintage) said it was important to harness internet advocacy.

Great visuals were a huge part of a successful stunt and being part of the conversation around the campaign for A Handmaids Tale shared Rosanna Boscawen and Helen Flood from Vintage. 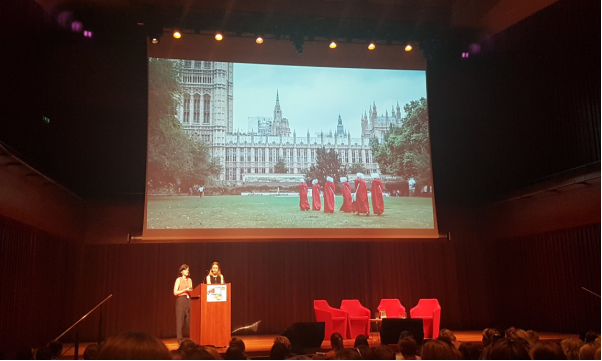 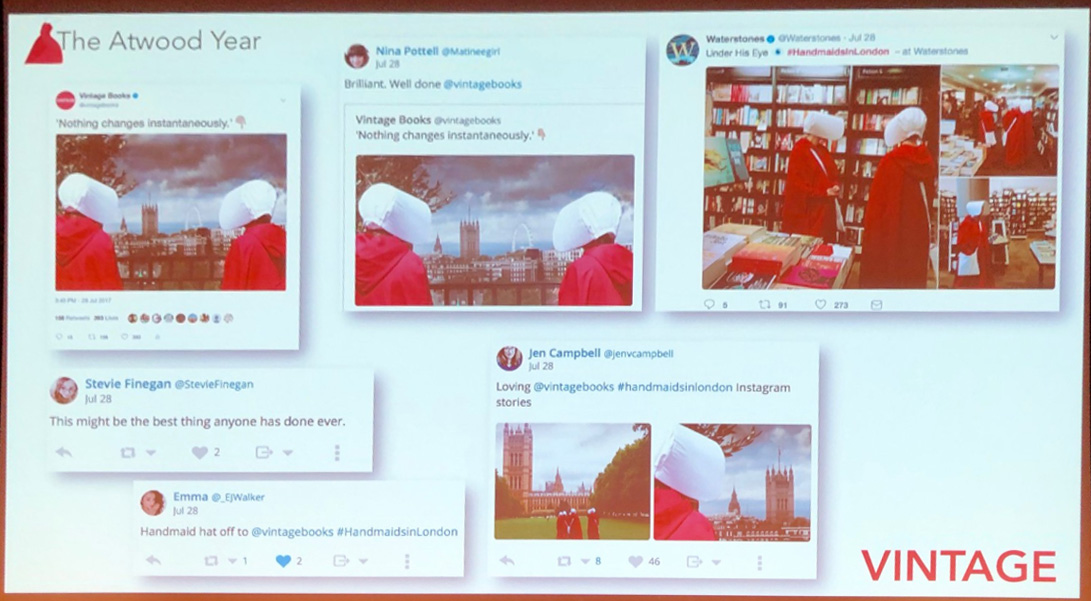 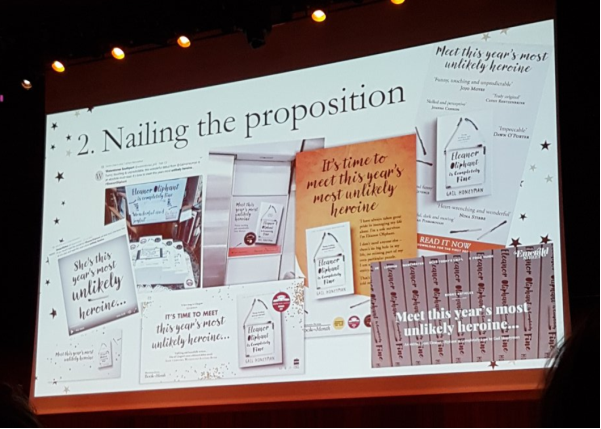 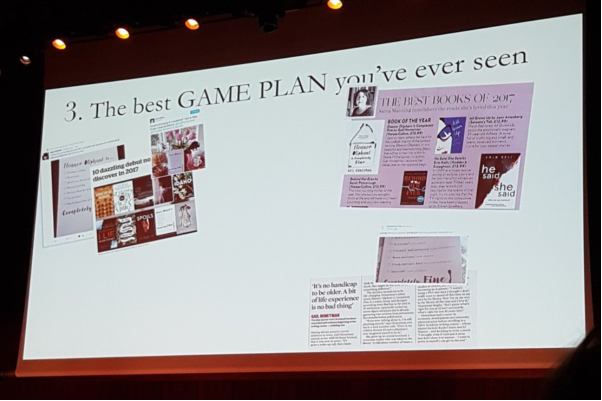 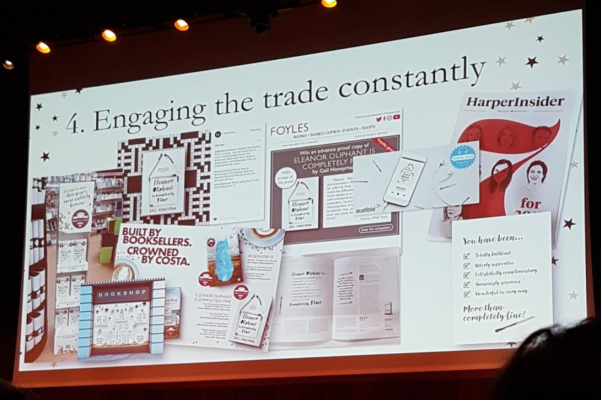 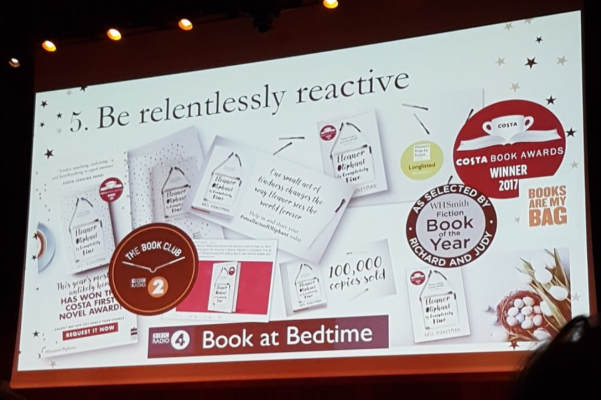 I love this ending slide from Harper Collins Children’s Books on what to do when you find something that works. 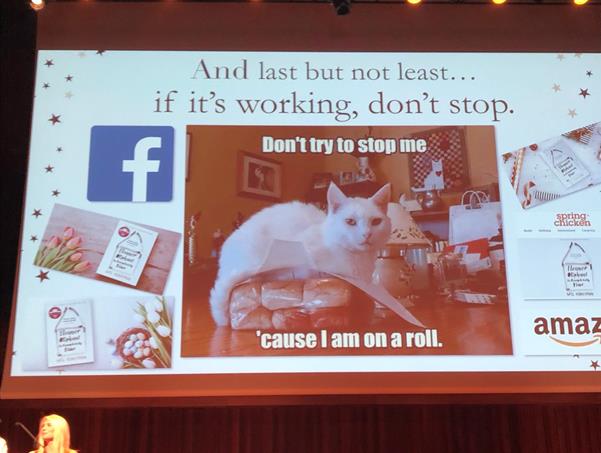 In summary from the team:

And finally... if you can get it working, don't stop!!
(even if it means making difficult decisions).

At the conference Joanna Rose from Mills and Boon discussed their redesign and rebrand to revitalise the brand in a market that sells 13.5m books are sold every year.
Updating the design to a more contemporary design set by market leaders like 50 Shades they positioned the brand as “the experts on romance” and as a result seen a huge sales surge.
On a personal note, my 82 year old great Aunt loved and read nothing else but Mills and Boon. It is great to see the brand position itself for a new generation. 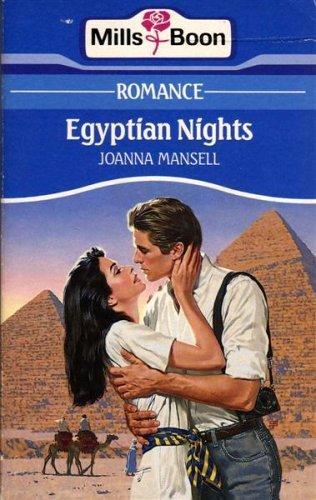 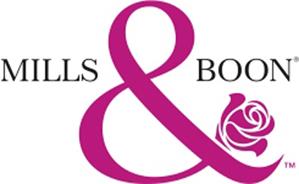 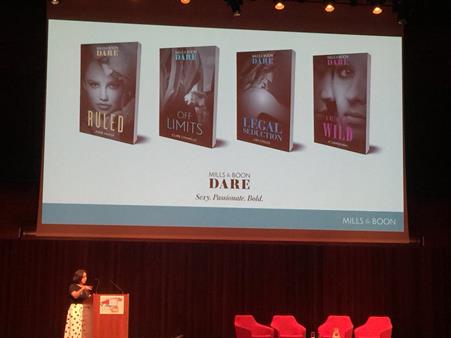 The importance of writers prizes & programmes

Later in the day there was a panel on 'The transformational power of writer prizes + programmes and how to make the most of them' with Valerie Brandes from Jacaranda Books, Dotti Irving from Four Colman Getty, Ruth Harrison from Spread The Word.
Awards can have a big impact but you need to capitalise on it yourself. Smaller publishers are often better at this than bigger ones because shortlisted books are often older titles and no longer the current focus in an organisation.

Publicists need to seize the moment and work with their author to capitalise on the achievement, even if it doesn’t win

Apart from making the greatest book, marketing is also key to your success! - Valerie Brandes

Risks and considerations came into play when @JacarandaBooks had a book nominated for @ManBookerPrize International. For a small independent publisher it is a daunting but amazing experience.

A second panel of the day was on the topic of “ reaching audiences through produced content” and featured Leena Norms , Ryan Dilley,  and  Videl Bar-Kar.

Podcasts were the focus of the discussion and everyone was a fan.

Miscellaneous quotes from the day:

“We’re all so much more interesting than an algorithm”. -

“ A trusted recommendation from a likeminded friend on Facebook is a powerful thing in bookselling.  - @HMacD_September Hannah MacDonald

I have been to quite a few of these and it's just great to hear the smaller but very important stories up there and all parties pretty much saying that booksellers are worth getting on side, however Amazon still mentioned as integral on the sales side. Shared by @mv_books

“Print and digital are not opposing forces” -  Guardian’s @reFurness